Is Your Child Deprived?? 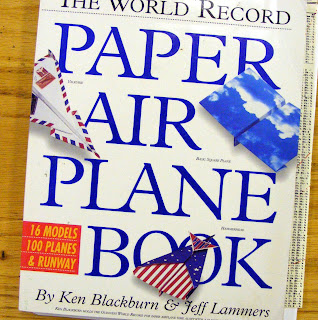 I love this book. It is a must have for every child. When Nathan was in Elementary School he drove his teachers crazy with all the paper airplanes he was making and flying through the classroom. Now I am on a mission to teach my students to do the same to their teachers!

The four forces of flight

The four forces of flight are lift, drag, thrust, and weight.

Lift is the upward force created by the wings moving through the air that sustains the airplane in flight. Lift operates to overcome weight. It must be equal to or greater than the weight of the object in flight and acting in the opposite direction. Lift can be increased by increasing the forward speed of the aircraft or by increasing the angle of attack

In Lab we built a pencil hellicopter We are now ready to launch our Pencil-Copter. Hold it between your hands and as high as you can. Give it a gentle spin while letting go. It will fly to the ground like a helicopter. You don't have to spin it hard and the higher you can get the longer it will fly. Maybe you can get an adult to help you fly it off of a deck.

Next we Made Catapults

This is a catupult I would like to build next year.

There are many types of Catapult. In modern times, the word catapult can be used to describe any machine that hurls a projectile. This can include a slingshot used to hurl pebbles, a machine that launches airplanes off aircraft carriers, and of course, the ancient weapons of smash destruction!

There are many different kinds of ancient catapults. The three major types are the Ballista, Onager and Trebuchet.

The Trebuchet is probably the oldest type of catapult. It was invented either by the Chinese or in the middle east. If you look at an Egyptian shadouf, it looks very much like a trebuchet, and it's easy to imagine that the trebuchet was inspired by the shadouf. Shadoufs have been around since the beginning of recorded history.

A shadouf is just a long pole balanced in the middle, with a weight on one end and a rope attached to the other end with a bucket tied to it. It's easier to pull something down that to lift it up, so people use these shadoufs to lift water from irrigation trenches. (They pull the rope down, and the counterweight pulls the bucket full of water up.) If someone had slipped and let go of the rope, an empty bucket could be flung high and far by the counterweight. A clever perrson might see the weapons potential in this.

Trebuchets were used mainly as lobbing machines to spread fire and diseased corpses, as well as a lot of solid missiles, over the walls of castles to rain down on the inhabitants. They were very effective!

The next oldest type of catapult is the Ballista. This machine was deliberately invented by the Greeks, around 800 BCE. Ballistae were even mounted on warships and used to hurl fire onto other ships.

The Romans took the ballista, used it, and then improved in in the Roman way to create the Scorpion, and then the Onager. Not much is known about how these machines really looked, but our best guess is something like this one.

Onagers were used right up to the middle ages alongside the Trebuchet, when gunpowder and the Cannon were invented and eventually replaced the catapults. 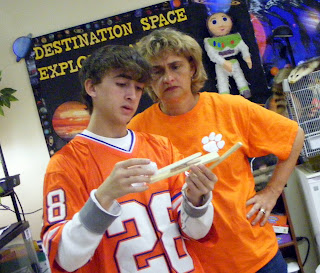 Here is the catapult we made. 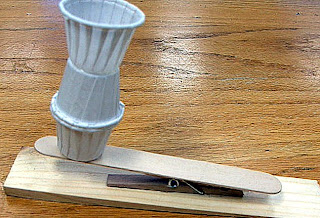 We used small colored marshmallows. I am still finding them under tables, in corners, and floating in fish tanks... 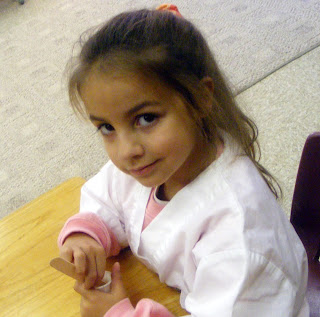 See you next month for the Human Body Lab!
Posted by Explore-Science-Beyond-the-Classroom at 10:02 AM

If you could e-mail me with a few suggestions on just how you made your blog look this excellent, I would be grateful.