Look What I Found

The other day I turned over a water trough in the pasture and look what I found hiding under the dark wet water tank. 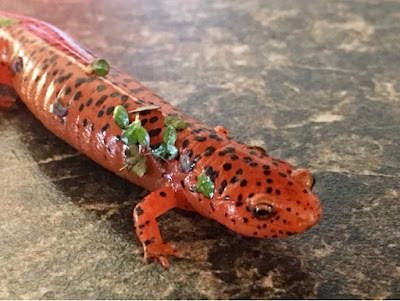 If you ask me I think they are both amazing little creatures and I am so happy to have seen it!

The problem I'm having with this identification is that he doesn't belong here on our farm. There are no seeps or streams on our property. The mud salamander inhabits swamps in low elevations, bogs, seeps, springs, and streams that not only provide a muddy bottom, but also clean and clear water. The mud salamander, a burrowing species, seeks shelter in burrows beneath leaf litter, logs, stones, or bark. The mud salamander may also build tunnels in creek banks, as well. These amphibians spend most of their lives in close proximity to water, but also burrow into the soil of the surrounding area.

Now I wish I had looked closer into its eyes to see if they were gold!

You just never know what will turn up in a day on the farm.  :)

Posted by Explore-Science-Beyond-the-Classroom at 7:36 PM

That is so cool! I hope he can avoid all the hazards of the farm (i.e. chickens)