This is our grandson Peter.  (We call him Pete Schmete, he calls himself Peter the Great).  He was named after my father, Peter.  They were both having a fight this day...  Don't worry they patched it up. 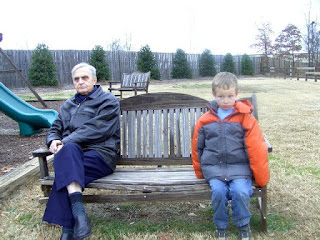 This is my time to brag on Pete.  He won "Best of Show" at the Northern Illinois Regional Science Fair. 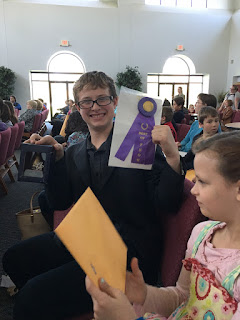 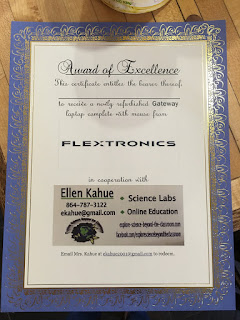 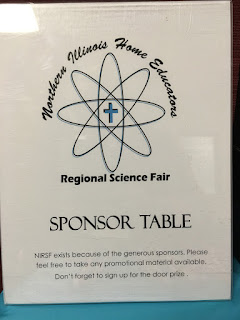 Explore Science Beyond the Classroom, in conjunction with Flex donated a Gateway laptop to the winner of the show. Peter won the laptop!  Boy is Peter excited!!

Peter showed his project to an electrical engineer and he was very impressed that the concept worked so well.   We affectionately call it his Peter Pot. 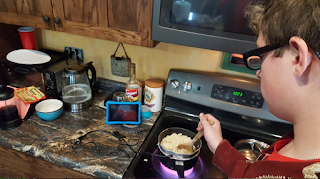 Here is Peter testing out his pot right before it broke, the night before the science fair... Gasp Gasp If you look closely you will see the red Kindle light indicating that it is being charged.  Peter is cooking Ramen Noodles and charging his brother Gabe's Kindle all at the same time.  Unfortunately, shortly after this picture was taken, the high heat from the stove broke the Peltier Modules inside the two pots so the experiment didn't work after that. It was too late to find more Peltier Modules to fix it.

The power pot is a thermoelectric generator that uses heat and cold to charge phones and other USB devices. Peter built his power pot with four Peltier Modules wired together between the two pots. The beauty of these devices is that they are not reliant on the sun.  They can be used in all kinds of weather and conditions, day or night.  They can generate electricity in the most remote areas.  There are no moving parts or turbines to break.  These pots use the Seebeck Effect to harnesses the voltage differences between two different temperatures and turn it into direct current electricity.

Peter obviously understood the technology completely because he was able to explain to the judges how his pot worked, how it broke, and how he could improve on the technology. 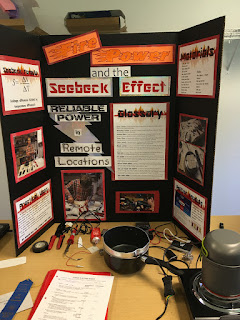 So they all headed to the Science Fair with fear and trepidation after working so hard on their beloved projects. 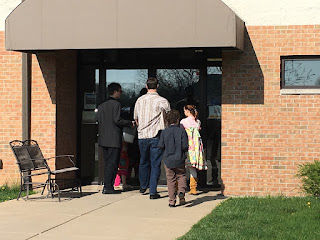 Brianna was not in the best of spirits that day but still managed to pull off  champion of the 4th-6th Grade.  Bree tested and scored over 53 peoples tests and questionairre in order to come up with indicators on memory retention.  Some of you took her test and for that I am sorry.  Don't feel bad, Grammy flopped on it as well. 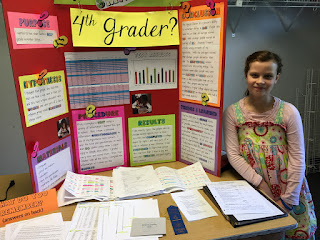 Gabe submitted an awesome project of Obsidian and Flintknapping (I never heard of this before Gabe shared it with me).  Flintknapping is the process of creating weapons and tools from certain kinds of rocks.  American
Indians used these methods to make arrowheads. 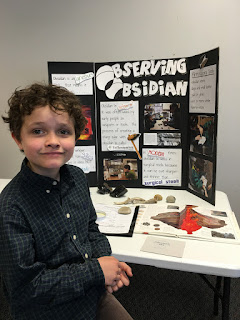 He is going to present his work to the Freeport Geology Club later this month.  Go Gabey!! 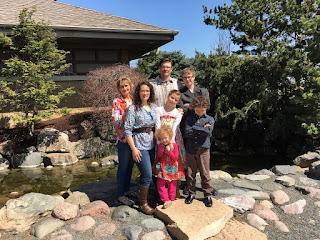 What a great day it was with lots of memories to treasure and lessons to be learned.
Posted by Explore-Science-Beyond-the-Classroom at 2:12 PM


My brother recommended I might like this blog. He was entirely right. This post actually made my day. You cann't imagine simply how much time I had spent for this information! Thanks! gmail log in